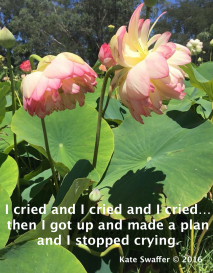 This week I was asked to provide some information about one of DAI’s founding members, the late Richard Taylor Ph.D. I headed to my files (word and emails) simply titled: Richard Taylor. It was an opportunity to reflect when not feeling hopeless, as it’s often Richard who I turn to when I want to give up or it seems too hard to keep going and I feel hopeless.

Email to J with me copied in, from the late Richard Taylor, received on 18 October 2014:

Hello, how kind of you to think of me. I too turn to Kate (and you) in my darker moments for inspiration. We need to stay close. In the end we have ourselves and each other. Here is something I just posted. I thought you might enjoy it. Stay close, stay in touch and I will do likewise.

Hello, while the sales and marketing departments are understandably upset when someone calls their baseless claims, “baseless claims” this is only news to those who originally believed the hype. For those living with dementia we know this is not our “home.” We know  we are strangers in a strange land – you all confirm that every day when you ignore who we are and what we need. We know what is happening to us isn’t helping us, we just don’t know how to fix it ourselves, and you all seem to be very little help. A red plate doesn’t make the food taste better. A pill or patch or both a day doesn’t help me understand what the hell is going on around me, who I am, and who you are.

Today, living in it is ignored by all in favor of paint, pills, and play. Purpose does not grow out of Bingo, Pharmacology, or design. My humanity is not nurtured, when most money has already been invested in building, cure research, and short term ROI’s. Staffing can make a difference. Staffing ratios do make a difference. Appreciating us as full human beings will make a difference. Dementia care cannot be given, it can only be offered. Humanizing dementia care does just that, the transaction create and reinforces humanity in both the giver and the receiver.

This doesn’t need an evidence based, double-blind, controlled, randomized, and over priced and hype study to confirm.

Just ask anyone living with dementia what is important to them, what do they want more of – a well designed facility or an appreciation of themselves as being all still full here? If forced to make a choice would they improve the quality of the food or the quality of their interactions with the staff? Would they vote for higher ceilings or meeting higher level needs?

Ask us, damn it. Listen to us. Stop trying  to prove to each other you are effective, you know how to be effective when we all see, know, feel, think, act like you aren’t! We don’t need more studies of the wrong elements. The ivory tower, the architect’s office, a drug companies labs are the not the sites from which the most needed, most effective fixes/cures/meaningful changes to resident satisfaction will come.

I have just been watching your Myths about dementia. Very well done Kate

It is so discouraging sometimes. One gets interviewed and  then  a different message is put out. I was on BBC tv on Monday and although they showed me running my groups (JMG’s) but they did not include the bit I said about how we can actually improve things; they showed Ian Botham the cricketer saying it is Ok not to bother to visit one parent with dementia because they aren’t there etc etc and even ended one transmission with that message! Outrageous!

At least when one is talking at conferences one can say things even if they have asked for your talk before hand so they can vet it!!

We do not give up and people like you and Richard inspire me to continue!

Best wishes to you J

16 thoughts on “Emails between friends”