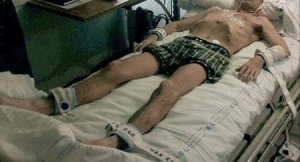 Sadly, I have yet another horror story of our acute sector in Australia, and their mistreatment of people with dementia. Obviously I had hoped the experiences I wrote of three years ago had not continued, and that care for this very marginalised group might have improved.

But alas, it seems not. When I wrote about this appalling treatment three years ago, I did not name and shame. I am not being that “restrained” this time…

A friend’s father who had Alzheimer’s Disease died in September as an inpatient of one of our main public hospitals, the Royal Adelaide Hospital, and sadly spent the last two weeks of his life starving himself to death, simply because the staff refused to allow him to go home to die, and had talked his family into leaving him into hospital, using the “but it is in the best interests of your father/husband” standard cop-out to lousy care.

He’d had another fall at home, but was not badly injured.However not long after admission he tried to get out of bed to go home, as he did not wish to remain in hospital. He had insight into what had happened, and into what was happening to him.

The label of “wanderer”, and then “agitated” and “aggressive” suddenly appeared, and without advising his family, or requesting permission, he was chemically and physically restrained. When they came to see him and discovered this, they were reassured the hospital had every right to use these restraints, and were also told it was “in their and his best interests”. This of course, is bollocks.

After two days of being shackled to the bed, and then chemically restrained as well, he decided he would not eat or drink anything more, nor allow any medication to be administered, and asked his wife and daughter to enforce this. They then sat with him most days and nights, watching him starve himself to death, a process tha took almost two weeks.

This is a gross abuse of the medical and nursing community’s power, and of a persons most basic of human rights, and someone needs to make it stop. I was so angry about it yesterday, I was unable to write a blog without the possibility of risking a law suit.

44 thoughts on “Dementia in the acute setting”