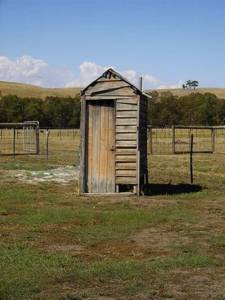 They were funny looking buildings, that were once a way of life,
If you couldn’t sprint the distance, then you really were in strife.
They were nailed, they were wired, but were mostly falling down,
There was one in every back yard, outside every house, in every town.

They were given many names, some were even funny,
But to most of us, we knew them as the outhouse
or the dunny.
I’ve seen some of them all gussied up, with painted doors and all,
But it really made no difference, they were just a port of call.

Now my old man would take a bet, he’d lay an even pound,
That you wouldn’t make the dunny with them turkeys hangin’ round.
They had so many uses, these buildings out the back,”
You could even hide from mother, so you wouldn’t get the strap.

That’s why we had good cricketers, never mind the bumps,
We used the pathway for the wicket and the dunny door for stumps.
Now my old man would sit for hours, the smell would rot your socks,
He read the daily back to front in that good old thunderbox.

And if by chance that nature called sometime through the night,
You always sent the dog in first, for there was no flamin’ light.
And the dunny seemed to be the place where crawlies liked to hide,
But never ever showed themselves until you sat inside.

There was no such thing as Sorbent, no tissues there at all,
Just squares of well-read newspaper, a hangin’ on a nail
on the dunny wall.
If you had some friendly neighbours, as neighbours sometimes are,
You could sit and chat to them, if you left the door ajar..

When suddenly you got the urge, and down the track you fled,
Then of course the magpies were there to peck you on your head.
Then the time there was a wet, the rain it never stopped,
If you had an urgent call, you ran between the drops.

The dunny man came once a week, to these buildings out the back,
And he would leave an extra can, if you left for him a Zac.
For those of you who’ve no idea what I mean by a Zac,

Then you’re too young to have ever had,
a dunny out the back.