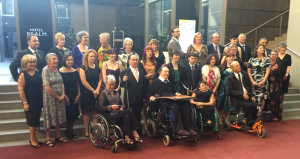 All winners were asked to give an impromptu speech, and although I managed to, I was very emotional, and found it quite difficult to say all the things I should have said!

Hopefully I did say that this award means a lot to me most of all because it recognises the 47 million people with dementia in the disability space, which is where we rightfully belong, just as any other persons with any other disabilities are recognised and supported.

We have a human right to better care and support, and away from Prescribed Disengagement ®, and with continuing advocacy, people with dementia will be recognised globally under the United Nations Conventions of the Rights of persons with Disabilities (CRPD). Currently, Scotland is the only country I know where we are actively recognised under the UN CRPD. The picture I have added is of all the finalists, and as suggested by my dear friend Lynda Henderson who nominated me, her partner the wonderful Veda Meneghetti both involved in the Kiama Dementia Advisory Group, and my BUB, I did end up wearing a ‘little black dress’!

This award is for all current and emerging members of Dementia Alliance International, for the 47 million people currently diagnosed with dementia, and for those who are receiving a diagnosis today and into the future. At the global rate of a new diagnosis every 3.2 seconds, this is perhaps the most important recognition dementia can receive. Thank you to the organisers, and to the judges for this important recognition.