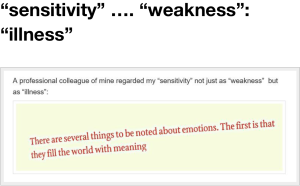 A special friend Dr Peter Gordon, whom we had the absolute pleasure to meet with his wife and daughter (his son as away) in Scotland earlier in the year, writes from the heart and soul of his own humanity. I very much appreciate his intellect, his humour, his depth of character, his willingness to stand up for what he believes in, regardless of what the cost of doing so may incur to him personally and professionally, and I feel as if we are kindred spirits. Mostly, I appreciate his friendship.

There are only a few people in the world I feel as if I am a kindred spirit with, one of them being the late Richard Taylor, who I miss greatly, and another Dr Shibley Rahman in London.

Of course, not to miss any of my other wonderful friends out either; I LOVE you all too.

Anyway, back to blogging! My blog I posted yesterday titled; Living with a chronic illness made me think about Peter Gordon, and one of his more succinct blogs, “sensitivity” … “weakness”: “illness” which I really loved, and which resonated deeply with me.

As it Day 26 of World Alzheimer’s Month 2015, or as we call it in Australia, Dementia Awareness Month 2015 #DAM2015, I thought the topic of ‘otherness’, or of treating the mind, was worthy of consideration in terms of dementia.

One comment on my blog yesterday also resonated, and fits my theme for today;

“So maybe the doctors are on the wrong track ..what if ?! they were more skilled with dealing with the mind?
In my opinion the body is ruled by the mind, healthy mind healthy body as the saying goes!
Yours sincerely L.F Paid carer for more than 10 years now…frustrated and still trying to find ways to help 🙂 “

It does seem, most people are not equipped to cope with things ‘of the mind’, especially mental health and as I was lucky enough to find out, also dementia. Doctors mostly want to prescribe a drug to ‘fix’ us, and when that is not possible, we sit in the ‘too hard basket’. I am often told, ‘there is nothing we can do, in fact, there is so much about the brain we don’t yet understand… see you in six months’.

Almost 30 years ago, just a few months after the suicide death of someone I loved, I needed to see a psychiatrist as I felt seriously suicidal. It was, in fact, a normal response to unresolved grief, and of wanting to ‘be with that person’.

Just like when I was diagnosed with dementia, I ‘came out’ about seeing a psychiatrist, and also, about spending two weeks in a psychiatric hospital for intense twice-daily grief counselling. I was admitted, only because I was suicidal, as if that had not been such a big part of my thinking, I would have been ok to have had treatment in his rooms. I was not ashamed to be seeing a psychiatrist, nor to be an inpatient, but sadly, almost everyone saw it as a weakness. Apart from one nursing girlfriend, every other nurse and most others in my life almost literally ‘took flight’, and then, for years to follow, would say things like, “Oh, are you going to go off the rails again?”

As dementia is still seen by so many people as something to be ashamed of (I say that, based on the way many people treat us, not by how I now feel about having it), and it is too often placed into the mental health basket, when in fact, it is a physical condition of some kind, this adds a double whammy to dementia of stigma and discrimination, of being ‘other’ and of being ‘not all there’.   It is an odd world we live in, when the people who often find it the hardest to ‘care’ for those of us ‘with things of the mind’ are our doctors and nurses. No, not all, but definitely more than is helpful…

Unresolved grief for people with dementia is a huge issue for us, and a major gap in our care.I firmly believe the unresolved, and mostly untreated, unmanaged, extremely complicated, changing grief causes so much of our sadness, anger and a sense of hopelessness.  It causes issues in our physical, physiological and emotional health, and impacts negatively on not only us, but everyone around us. If we start managing our grief, and our care providers support us to do it well, everyone will be better off.

Oh, but of course, as grief is ‘treating the mind’ I guess the psychologists and social workers will have to take this on…

Ps. I know many medical doctors and quite a few nurses who have been not only ignored by their colleagues when they were struggling with mental illness, drug or alcohol dependency, and so on, but not helped. This is reprehensible and unethical, when people who are ‘healthy’ and medical trained in some way, find it too hard to look after their ‘own’, especially when the problem is seen as weakness. In his letter to me before he took his life, David said he was “too ashamed to get real help for his mental health and drug dependency issues, as felt sure it would end his private medical career… ” That was perhaps the one thing that upset me the most.